Skip to content
HomeNew: Join the conversation feature for every Rise board

We’ve added a small new feature to every Rise board – it’s called “Join the conversation“. 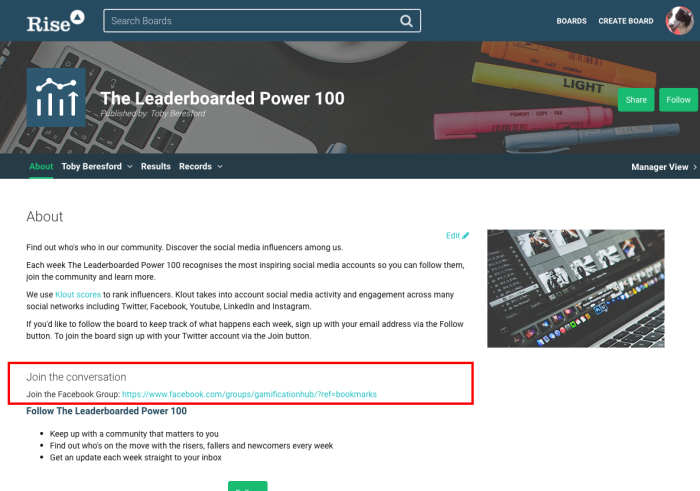 Any Rise Board manager can now add a social platform section to the About page explaining how and where to join the online conversation about the board.

The conversation channel could be something as simple as a Twitter hashtag to use when discussing the board, a what’s app group invite URL or a dedicated Facebook Group.

One of the perennial issues with any new network like Rise is deciding what parts of the overall experience happen on our site (platform features) and what happens elsewhere (application features).

This feature represents a clear step in the application direction. While Rise lets you build a social graph around success tracking, we won’t be offering further community features for your 4C discussions (cheering, celebrating, commiserating and calibrating) – we’ll leave that to the dedicated social  apps that do that better.

In this update, we’ve provided integration initially for Twitter hashtags, Facebook groups and raw URLs which we show on your board’s about page. Over time we’ll surface the choice of social platform and channel elsewhere in the audience and player experience.

If there’s another social platform you’d like to see deeper support for then let us know.

One thought on “New: Join the conversation feature for every Rise board”