Skip to content
Home7 ways to train for your dream job – lessons learned. 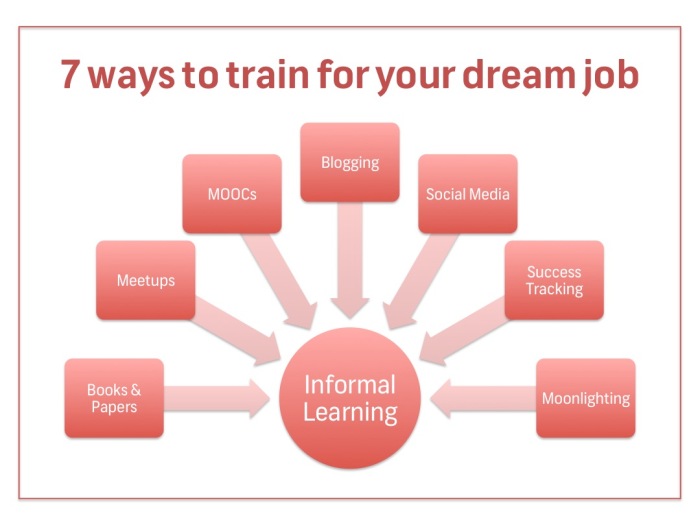 Career development isn’t something most of us do very well. Our horizons are all too often limited to the career progression offered by our current organisation, our bosses job or perhaps a dreamy, unfocused vision of turning our hobby into a day job.

Even in well run organisations, career progression is only properly discussed in an annual performance review and tends to be narrowly focused on roles within the current business unit. Of course this makes sense, there are few rewards for HR and managers who “outplace” cost effective and high performing staff!

However in the digital age, employees no longer need to accept the status quo. Just a mouse click away are the informal learning resources and opportunities for us to take our career in a new direction – we just need the guts to try.

In this post I want to talk about the journey of Andrzej Marczewski who in 2011 set out on a journey to leave his job as an intranet manager to become a leading gamification consultant. It took him 5 years but he eventually achieved his dream job!

To do so he used a number of informal learning methods, not provided by his then employer, that brought him success. We can learn from the route he took.

In his own words, the tools he used were:

“Social media was the key to getting really going as it gave me access to people who had the same interests as me and could point me in the direction of what to read to learn more – as well as being willing to teach me directly. If social media didn’t exist, there would have been no chance at all for my work to get me noticed.”

“I read up on game design, with books such as The Art of Game Design by Jesse Schell and A Theory of Fun from Raph Koster. I researched the psychology of rewards from papers by the likes of Deci and Ryan, but also from more “pop” books like Nudge and Drive.”

“Kevin Werbach released his Coursera MOOC course on gamification. I wish this had been around in 2011 as it was a great way to validate a lot of what I had been doing.”

“I started to write about my version of gamification and my views… I continued to research and produce content on a weekly basis and just kept gaining traction.”

“I went to meetups and events about gamification as often as I could and eventually started to speak at them. I remember my first Gamifiers Meetup talk with abject horror. I spoke at conferences such as the Gamification World Congress which helped with exposure greatly. ”

“By 2012 I was getting fairly established, I had started to be a regular in the Gamification Gurus top 10. I have to give credit to being on the Gurus leaderboard as well, for better or worse it provided good exposure over the years!”

“I did a little bit of gamification consultancy on the side, but it was not until 2016 that I finally broke into gamification as a career – 5 years after I started making a move on the industry!”

So those are the some great lessons learned!

For me, the most interesting aspect was how Andrzej used the Gamification Gurus Rise board to track his social media success. The board tracks his blogging activity, engagement with his twitter content and the reach of his talks using Slideshare. By optimising all three of these metrics, over time Andrzej was able to reach the top 10 and improve his online social presence. Having such a strong online presence in the sector was a big benefit to his prospective employers looking to offer expert advice to their clients. Success Tracking in action!