Most analytics systems don’t stretch beyond the numbers themselves: they don’t provide a narrative that applies to the context.

Most web businesses and bloggers are familiar with Google Analytics – the free web site visitor analytics service. It’s very much a one-size fits all approach:

The Google Analytics layout is pure business dashboard design thinking – you can see graphs which represent the numbers visually. There is a pretty heat map to show time of day but essentially this enables you to access the numbers.

Google Analytics provides no additional context: the visual branding is the same for whatever I am analysing – whether it’s one of my web sites or one of my blogs.

Contrast this with analysing my step count on FitBit: 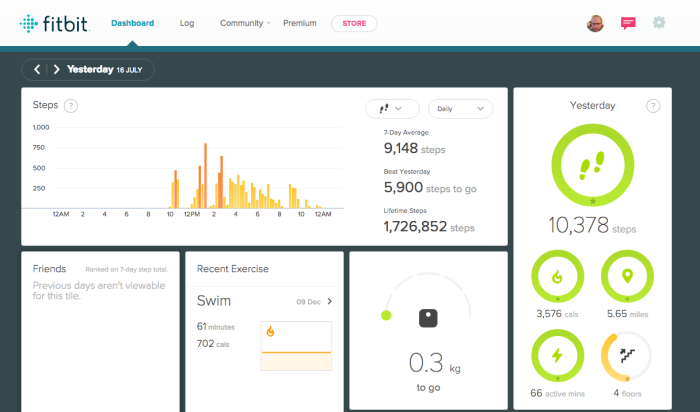 FitBit here is strongly branded – I’m very aware the  I’m on FitBit. I ask my friends if they are on FitBit – I use language like “I’m going to check my FitBit”. In fact the branding is so strong I wouldn’t naturally think of myself as “doing analytics” or “reviewing my statistics”. I just think of it all as “FitBit”.

Branding really matters because it provides a bridge allowing emotional engagement with my tracking numbers.

Imagine if FitBit stats were presented in the same format as my Google Analytics – I can’t see them as being nearly so successful!

With success tracking, we take branding seriously – that’s why Rise Board has its own brand and visual identity:

By taking the time to give your success tracking program a brand you create context for your players, a language, a visual identity and an emotional connection.

A good success tracking program, like FitBit, becomes a brand in itself.